How Does Wireless Surround Sound Work?


How Does Wireless Surround Sound Work?

Few things match the visual and auditory experience of going to a great movie theater.

You’ve got the sprawling wide-format display, the wicked-awesome previews (and the precursory trivia, if you’re lucky), popcorn, cherry cola, and especially the immersive surround sound setup.  Helicopter flybys are so convincing you might turn your head to follow them off into the imaginary horizon.  Hefty subwoofers work overtime to produce every explosion, angry door slam, and menacing line uttered by James Earl Jones… you get the idea. Why does it seem like every piece of the puzzle has been streamlined except for the audio.

We have long had the comfortable furniture, custom lighting, great speakers, and high definition displays that can be controlled wirelessly; and while all of this is simple enough to get started with, wiring up the surround sound has always been a bit of a pain.  Drilling holes into the floor and running wires up under the house is never anyone’s favorite job. Until fairly recently, you practically needed a master’s degree in home improvement to arrange a surround system in your living room.  Audioengine’s W3 Wireless Adapter can get you up and running quickly, without having to punch new holes in your home. In order to visualize how Audioengine’s W3 Wireless Adapter will play a role in our system, we need to understand a few things about surround sound itself.  Where traditional stereo audio has two channels (a left and a right), surround sound typically has six channels consisting of a center, front left and right, back (or surround) left and right, and a subwoofer.  In two-channel stereo mixes, certain sounds are assigned to either the left or right channel or pan audio slightly more to one side than the other.

Following this same concept, a surround sound mixing engineer has to assign audio appropriately to all six channels; so when the helicopter flies by your right ear, the engineer would have had to pan the audio from the center channel to the right front and then to the right back (or surround), and also mixed in the subwoofer as necessary. It’s a big important job, and in order for us to revel in the spoils of the mixing engineer’s expertise, we must create a surround sound system with the appropriate connections to allow for true surround sound. Most surround sound receivers will refer to these 6 different channels as “zones.”  Receivers often have a powered output (meant for passive speakers) for each zone, as well as a preamp output (meant for powered speakers) for each zone.  The front and rear surround zones should each require a left and a right speaker, and sometimes the center channel will also have the option for a left and right channel.

Now, when we talk about having a wireless setup, we are only talking about making the audio signal wireless, as a power signal cannot be sent wirelessly (at least not yet); with this in mind, we need to make sure the surround sound receiver we choose has all of the necessary preamp outputs (usually RCA-style connectors) for use with powered speakers. The W3 is a sweet little device which allows for the transmission of very high quality audio over a proprietary WiFi network.

It generates its own WiFi connection between the W3 Sender and the W3 Receiver, and does not rely on an internet or WiFi connection previously established in your home. The coolest part is if your internet is sluggish or it goes out, the W3 functions completely independently from your home internet connection.

Think of the W3 as a means of eliminating the long wires you would otherwise have to run from your surround sound receiver, down through the floor (or up through the ceiling and walls), and to each of your speakers.  Instead of running long wires straight from point A to point B, you would connect the outputs for each “zone,” to a W3 Sender unit.  The W3 Sender unit would then wirelessly send the audio for that zone to the corresponding W3 Receiver unit, which should be connected to the input of the speakers in that zone

You are not required to use Audioengine speakers along with the W3 Wireless Adapter (although, we are quite fond of them ourselves).  In fact, you can use any set of powered speakers that has a left and right channel and an available audio input.  Not everyone chooses to put a subwoofer in their surround sound setup, but if you do, the same concept applies: subwoofer output on the surround system, to the W3 Sender; W3 Sender transmits audio to the W3 Receiver; W3 Receiver plugs into the input on the subwoofer.  Boom! – literally. It’s important to note that you would need a pair of adapters for each surround sound zone so that the proper audio information is reaching the speakers it is meant to reach.*

*We’re aware of some customers using just one set of W3 adapters. They send the audio from one “zone” out to a set of powered speakers and then daisy-chaining the audio out to additional sets of powered speakers.  A setup like this will exhibit sound in all 6 channels, but all six channels will be receiving the same exact audio data at the same exact time, which means you won’t actually be experiencing true surround sound audio.

Once you are familiar with using the Audioengine W3 Wireless Adapter, we guarantee you will find a number of other uses for them around your house.  They can be used with a wide variety of other audio products, they have a long transmission range without blips and drop-outs, and their audio quality is impeccable.  So, are you ready to rig up your wireless in-home surround sound dream system? 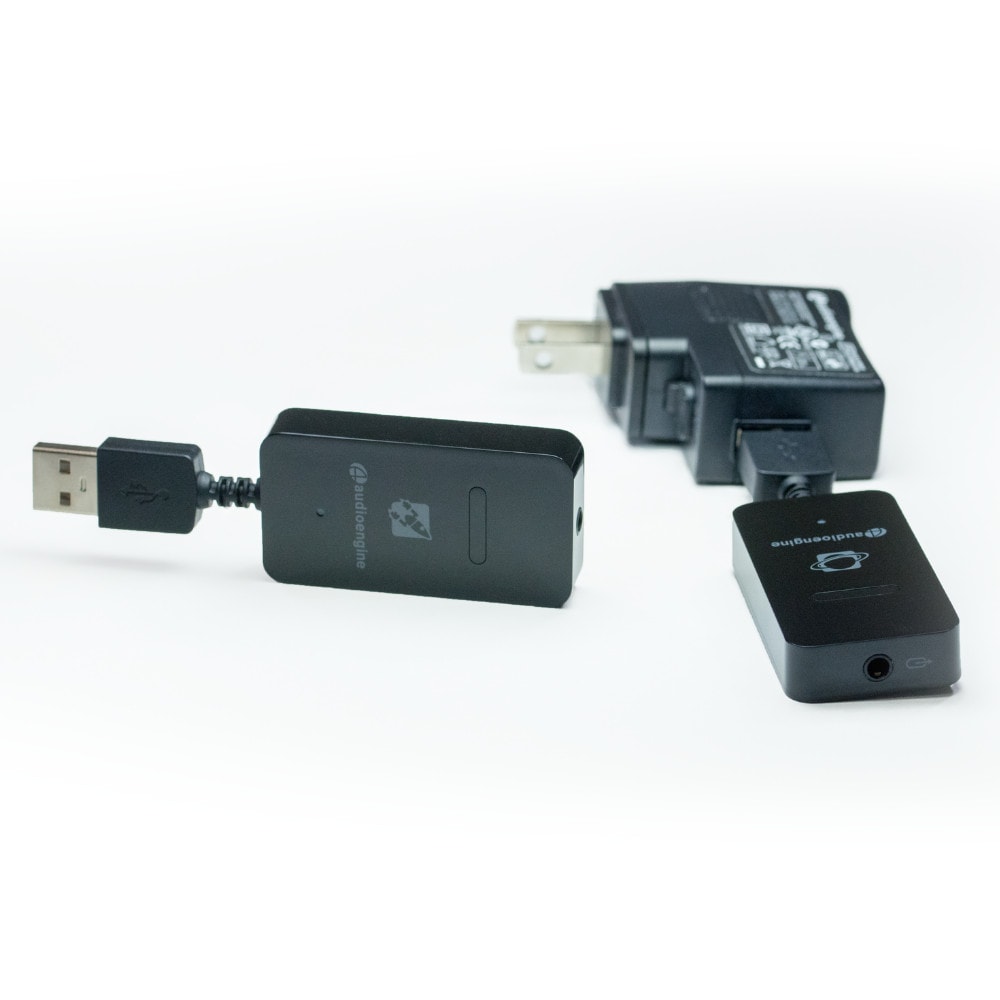